The interaction between the devices connected to the BLI is defined by means of a Macro. A Macro consists in a set of events and commands. When any of the events that are defined in a Macro occur (e.g. a key press on a keypad; a Control Command on a Bang & Olufsen remote control etc .), the macro will be triggered. This means that the commands in the macro will be executed in order. 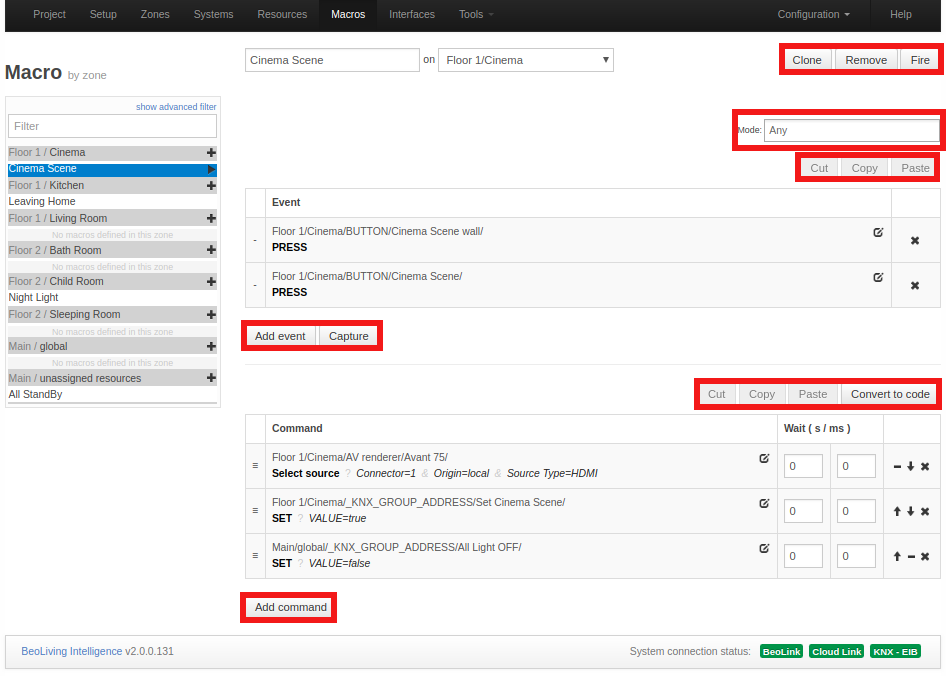 A Macro is also assigned to an Area/Zone to which it belongs even if it handles activity outside the zone. Having Macros assigned to zones helps when setting up user interfaces. The left column shows all Macros contained in each Area/Zone. To add a Macro in a specific Area/Zone press “+” in the column entry.

For each macro, the next options are available:

When pressing the Add event button, the window expands, fields for the Resource Event are shown and are filled in by selecting from the drop down lists with each entry field. The illustration is an example only and the drop down list may vary depending on the choices made. 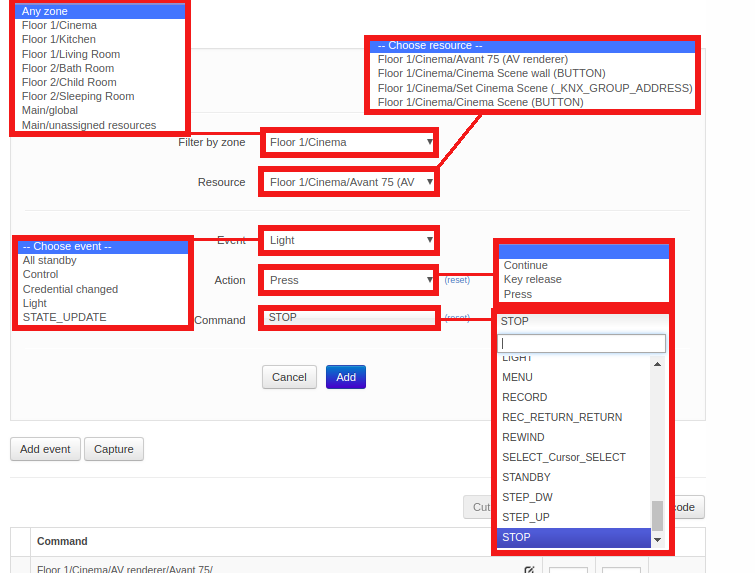 The list of events (for triggering a macro) can be filled in manually or selected from captured events.

There are three types of events:

When pressing the Add command button, the window expands, fields for the resource command are shown and are filled in by making selections from the drop down lists with each entry field. The illustration is an example only, and drop down lists may vary depending on the choices made. 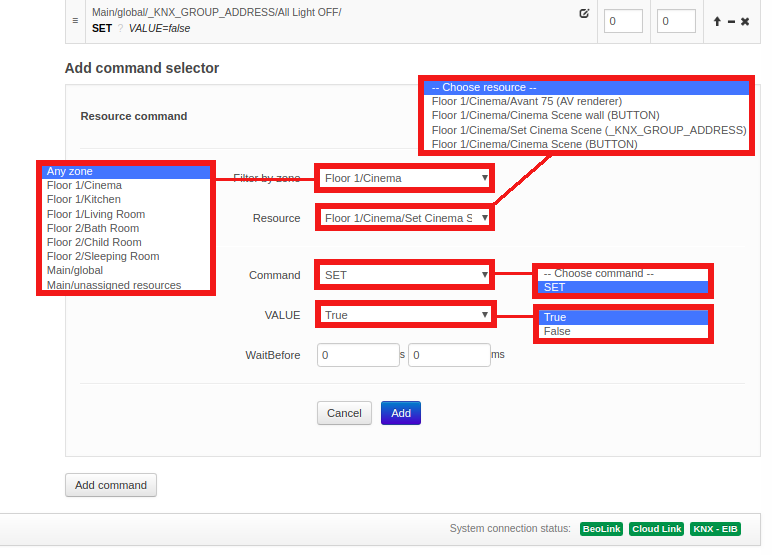 Commands are the actions executed when a Macro is triggered. The list of commands are executed in order, and a delay can be set before each command as a combination of seconds and milliseconds. The list can be reordered by dragging the handles at the left of each row, or by clicking on the arrows on the far right of each row.

There are four types of commands:

Several command options are available to act on macros:

Although not recommended, it is possible to make a loop where a macro calls itself as the last command, e.g. switching Off growth light for plants; night and day temperature control, etc. It is required to make a macro that stops such loops.

Firing a new macro makes it possible to take advantage of a existing functionality without having to maintain several copies inside different macros.

As a macro execution can take some time due to delays between commands, it is important to take care of what could happen if another macro is triggered during the execution.

For instance if a macro called “THEATER ON” (for setting- up a home theater) takes more than one minute to execute, what will happen if this macro is called repeatedly? Will all commands start to overlap each other? What will happen if the “THEATER OFF” macro is called to switch the home theater off during the set-up? It is important to understand that a possible messy overlap of command executions from different macros may occur. The possibility to cancel or collapse a macro being executed ensures that the ongoing macro will end immediately.

Standard events and commands apply to a single specific resource. Generic programming makes it possible to refer to a whole set of resources at once.

This has the following advantages:

NOTE: Generic events and commands are matched against all possible resources every time an event occurs or a command is executed. If the name of a resource is changed on a working configuration, the resource will no longer match an existing generic event or command. Therefore, it is important to be consistent when naming resources. It is also important to avoid spoiling functionality by renaming resources.

Commands are also represented by a code. The main difference is that there is a new type of selector for matching the same area or zone as of the generating event. A command code starting with $area/$zone/AV renderer/TV will act on all audio and video renderers named “TV” on the same area where the event generated and a command code starting with “*/*/AV renderer/TV” can be used to work with all TVs in the house.

Improve this document: Edit on github!